9/11 Artifact from the World Trade Center

A tribute of remembrance and honor to the men, women and children killed in the terror attacks of September 11, 2001.

Township volunteer firemen were responsible for the acquisition and transportation of the beam.

HCPAI Board member, Roger Harvey was responsible for the overall concept and design of the memorial garden and consulted throughout the process.

The extensive use of features already in the park such as rocks around the trees and dune were considered in the concepts. The seating wall surounding the rose garden will utilize the stone already in use in the park.

Two black six foot squares representing the Twin Towers are set in a grid patterned concrete walkway, the two squares duplicate the position of the real towers. Each tower has an informative plaque embedded in the concrete, the tower design and the plaques are all flush with the walkway. 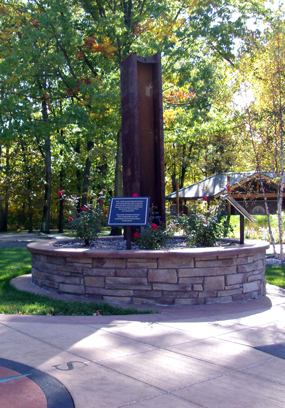